Pancyprian WIN Honors Tasoula Hadjitofi as Woman of the Year

NEW YORK – The annual Pancyprian Association Women’s Initiative Network (WIN) Gala took place on March 6 at the New York Hilton Club in Midtown Manhattan and honored author and champion of women and human rights, Tasoula Hadjitofi, originally from Famagusta, as the 2020 Woman of the Year.

Hadjitofi’s book, The Icon Hunter, a memoir published by Pegasus Books in the United States, was recently translated and published in Cyprus and Greece. In the memoir, she recounts her life and experience as a refugee from Famagusta, and her efforts to recover stolen cultural items from Cyprus, including many icons and religious objects looted after the illegal invasion by the Turks in 1974 and the subsequent years of occupation of the northern third of the island nation. Hadjitofi is nominated by both Cyprus and Holland for the U.S. State Department International Woman of Courage award.

Theana Iordanou, WIN President, gave the welcoming remarks at the event thanking all those present for their support and especially the members of the Board and the young women who helped organize the event, noting that these young women will be the future leaders of WIN. She thanked Consul General of Cyprus Alexis Phedonos-Vadet, the Consulate General of Greece Cultural Attache and Public Relations Officer Evelyn Kanellea, and Holland Cultural Attache Joost Taverne for their presence. Each offered their congratulations to WIN and to the honoree for her extraordinary efforts to protect and preserve cultural heritage. 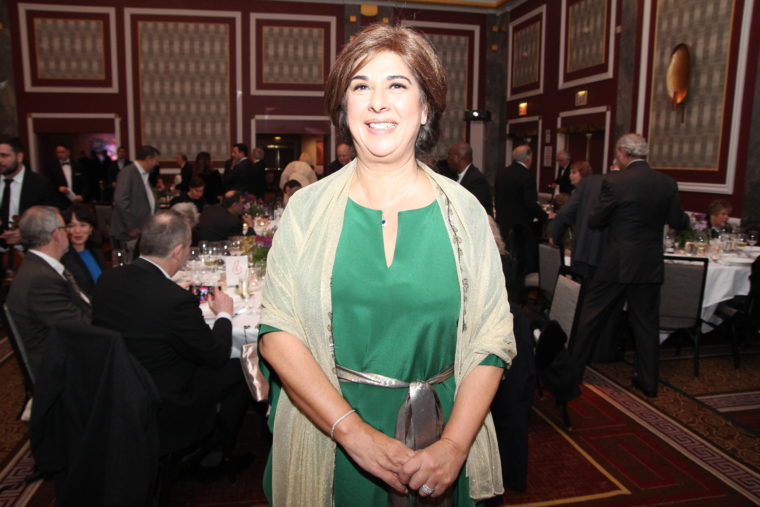 Kanellea also noted the celebration of International Women’s Day on March 8 and the election of the first woman President of the Hellenic Republic this year, adding “the fact that when women are included in the social, professional and political spheres, life improves for everyone.”

Taverne noted that Hadjitofi is originally from Cyprus but now lives in the Netherlands, and that they are proud of her and her efforts over the years to protect valuable artifacts and cultural heritage.

Consul General Phedonos-Vadet congratulated the honoree “who has done so much to expose to the world the plight of Cypriot culture, but it’s not enough for us Cypriots to know that over 500 churches, monasteries, and cemeteries have been desecrated in Cyprus by the Turks, it’s not enough for us to know, we need to enlighten the world, and her book, her activities are spreading the word around the world about what happened in Cyprus and also tries to stop this from being repeated whether it is in Afghanistan, Syria or elsewhere, so again I congratulate her, I congratulate the Women’s Initiative and I would like to wish all the women a happy Women’s Day on Sunday.”

Federation of Cypriot-American Organizations President Kyriacos Papastylianou offered his congratulations, in Greek, on behalf of all the members of the Federation for Hadjitofi’s efforts, and quoting the late Melina Mercouri who said that our cultural heritage is our fortune, and if we lose it, we are no one.

A short video presentation highlighted WIN’s efforts and Hadjitofi’s work which extends not only to Cyprus but to other countries and refugees who yearn to return home.

Pancyprian President Philip Christopher noted the presence of many who have been a part of the crusade for the cause of Cyprus. He congratulated WIN and its President Iordanou for their selection of Hadjitofi as this year’s honoree. Christopher pointed out that for 45 years Pancyprian has been fighting for freedom and justice for Cyprus. He noted that Pancyprian began with its Athletic division and now has six divisions including the Dance Division, Women’s Division, the Choir, and Theatrical Division, and thanked the division presidents for their efforts. He thanked Nassau County District Attorney Madeline Singas for her presence, adding that she is not only Greek-American, but she is the most successful DA in New York State.

Christopher said, “We as American citizens can never forget that in July 1974, 200,000 Greek Cypriots were evicted form their homes and today, we remember our parents and grandparents and those people who have died unable to return to their homes. Today, the WIN division is celebrating and honoring an individual that has made a difference, a refugee form Famagusta, who has made it a point to fight for the principles and ideals that we believe in because we are the descendants from the birthplace of democracy, and as American citizens we have an obligation to make sure that the Hellenic values and ideals that we believe in are true for Cyprus.”

Iordanou then spoke about how Pancyprian has always been a part of her life since both her parents were from the occupied parts of Cyprus and how it is an honor for her to be the President of WIN. She then introduced the honoree, her friend, noting her heroic efforts and that she is also a mother and an entrepreneur, and a wonderful role model for all women.

In her moving acceptance speech, Hadjitofi noted how she has struggled throughout her life to find a sense of belonging since she was forced to leave her home in Famagusta. She then lived in Limassol for two years and then studied in the UK and eventually moved to the Netherlands. Though she appreciated the Netherlands for the opportunities it gave her, she felt guilty to say she loved the country, until 2013 when the Dutch Prime Minister called her about the return of four icons and asked her to make the announcement. She said that she felt that sense of belonging and that she was finally understood. Speaking about the experience of war, and being a refugee woman, she noted that you become “invisible” but that for those from Famagusta, a ghost town, “you don’t exist.”

She said, “Do you know what it’s like to make it, to be able to travel to China, Mongolia, Africa, but you can’t go home? Do you know what it’s like to go back to Famagusta after so many years and to stand on that line and to see your school, to see your home, and if you step one foot there are five soldiers there to shoot at you? Why? Because you just want to go back home.”

“I once asked a famous human rights lawyer in the UK, ‘Which international law forbids me from going back home? He started laughing and said, ‘the law of occupation, I suppose’ and here is where we are today, we live in a world where we have lost our moral compass, we live in Europe where each one of us looks at their own borders instead of looking united when the refugees are flocking whether it’s Italy or Greece, we should be united and take one standard, we live in a country where money and power corrupts us and when that happens we are vulnerable for extremism to divide us, so each one of us has their own way to fight and when I left home back in Famagusta, I was not fortunate to be in a country where there were so many Cypriots and Greeks, I was one of the first Cypriots in the neighborhood, and I fought my own journey by bringing back home each item of antiquity to heal my own inability to go back home, it was my journey to be able to become a better person and not a bitter person, and I recommend to everybody to look at yesterday and our sorrows, but we have to move on in a constructive manner.

“I could be a girl from any area of conflict, I do not want to be bitter, that is why I am blessed to be in a country like the Netherlands and set up the NGO Walk the Truth. It is my dream to take the lessons learned from the cases of repatriation of the Netherlands and share them with every other country to remind everybody that the Cyprus issue is not resolved, no matter how rich and successful I am, before I die, I want to go home, and if I do not go home, I have written in my will, I am lucky that I’m Dutch and I can, I wish to be burnt and have my ashes scattered in Famagusta, this is how strongly refugees want to go home.

“So I wrote this book and dedicated it to the 65 million refugees, I’m just a normal woman, a wife, a mother, a businesswoman, I did not choose to fight the art traffickers, they fought me, but I decide I’m going to beat them at their game. And do you know why I could achieve that? Because I am a woman. My greatest asset is that I have always been underestimated, in the technical world of IT, and in the world of men, they have always underestimated me and the art traffickers, they are male dominated, so I wanted to say thank you to all of you for being here tonight, thank you to the Pancyprian organization for honoring me, thank you to the dignitaries, the representatives of Greece, Cyprus and the Netherlands for being here to tell me I belong to you, and of course, last and not least, the women, Theana and all the committee who worked so hard to honor me tonight, and I promise you as a woman and no matter where I come from I will be next to you and I will in any way I can to help make WIN more international. Thank you so much.”

A portion of the proceeds of the WIN Gala will go to Walk of Truth, a charitable organization founded by Hadjitofi in Holland that protects cultural heritage. More information on Walk of Truth is available online: walkoftruth.com.

Nicole Petallides served as MC and offered her congratulations to WIN and to the well-deserving honoree, noting that it was an honor to be here with International Women’s Day on March 8.

About the Author: Filippos Siakavaras